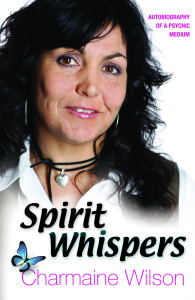 Charmaine Wilson was not woken up to her gift to re-unite those who have crossed over to those still in life until 1999 after her father died. It took a further 3 years to work out what the voices she kept hearing were and then learn how to work with them. If it wasn’t for the great mediums Doris Stokes and John Edward, Charmaine may never have realised exactly what she was but thanks to their brave efforts of bringing medium ship into the open she was able to work with her hidden talents.

She has lived through a lot of heartache in her life, including the death of her brother and her four year old daughter, both to tragic accidents. Her mother passed in late 2006. She has also lived through the trauma of suicide of a very dear friend and has recently lost her stepfather.

These deaths have made her a most compassionate and understanding reader, especially in relating to how her clients may be feeling.

Charmaine has been dedicated to giving as accurate information about the spirit world to her clients since she began her work in 2002. Though she has not been in the industry long, her achievements have been recognised by The Australian Psychics Association and she was awarded the 2005 Australian Psychic of the year and 2009 Queensland Psychic of the year for her efforts. In 2008 she was the winner of The One, a nationwide search for Australia’s most gifted psychic.

She has created a workshop weekend called Living With Spirit, based on her own journey into the light after falling down in grief. She runs these workshops and retreats on a regular basis to try and help people understand the whole life death process so as they may get back on the road to recovery faster so as not to waste this wonderful life we have been given.

Charmaine has written two books Spirit Whispers, which focuses on her development as a medium and Life goes On, Spirit Children, which focuses on aiding bereaved parents. She travels around Australia in a bus with her husband, Patrick and their two dogs doing medium connection shows throughout regional Australia.